Thoughts about the books I've read

"History tells us what people do; historical fiction helps us imagine how they felt."

New Book Review: Richard the Lionheart: The Crusader King of England, by W. B. Bartlett 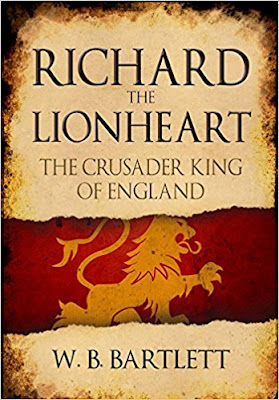 New on Amazon UK and Amazon US

Hollywood has a tradition of introducing King Richard I in the last few minutes of stories of Robin Hood, but how much do you know about the real man behind the myths which have grown over the years? I recall being taught at school about his wars of the crusades and remember thinking it can't have been good to be out of the country for quite so long.

Richard the Lionheart: The Crusader King of England is therefore a useful reappraisal of what King Richard really achieved, and provides an intriguing insight into his life, and how his actions were shaped by the times he lived in.

I found surprising parallels with the modern world, as he battles Islamic enemies, and had the nickname 'Richard Oc e No' (Richard yes and no, much like our modern leaders.) The author visited Syria for his research on the great crusader castles, and notes how well the different communities have coexisted, yet as I write this, Syria is on the brink of an international war.

W. B. Bartlett's experience shows in his lively and readable style, and he uses engaging montages to bring the story to life.  I'd never thought about it but Richard's untimely death meant he never had the chance to show us what sort of king he might have been. I'm sure he'd have done a better job than his successor, King John.

This isn't the story of an English king, it's about the life of an Angevin noble who became King of England. A great book which I am happy to recommend.

Bosworth 1485: After victory against King Richard III, Henry Tudor becomes King of England. Rebels and pretenders plot to seize his throne. The barons resent his plans to curb their power and he wonders who he can trust. He hopes to unite Lancaster and York through marriage to the beautiful Elizabeth of York.

With help from his mother, Lady Margaret Beaufort, he learns to keep a fragile peace. He chooses a Spanish Princess, Catherine of Aragon, as a wife for his son Prince Arthur. His daughters will marry the King of Scotland and the son of the Emperor of Rome. It seems his prayers are answered, then disaster strikes and Henry must ensure the future of the Tudors.

Available on Amazon Paperback and Kindle US https://www.amazon.com/dp/B06XQK1R6S

And on Amazon UK https://www.amazon.com/dp/B06XQK1R6S 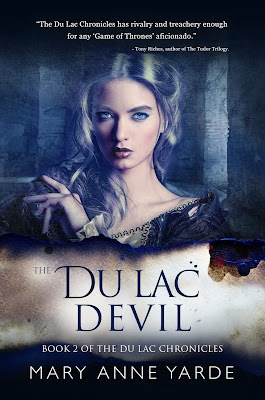 Available on Amazon UK and Amazon US

The feisty Du Lac brothers are reunited at the old family home in Brittany - what could possibly go wrong?  Well, quite a lot actually. For a start, author Mary Anne Yarde has a liking for deeply flawed characters. Secondly, you need to be thinking George R.R. Martin rather than Sir Thomas Malory. Chivalry is hanging in by its fingernails and treachery is in the air.

Book two of the Du Lac Chronicles would work perfectly well as a stand-alone novel but to really understand the complex web of relationships I recommend starting with the first book. You also need to keep your wits about you, as a fast pace is achieved with short chapters and plenty of action.

I don’t want to include any ‘spoilers’ but at one point I was reminded of those TV programmes that begin with a warning viewers might find some scenes disturbing. There are also tantalising glimpses of the Arthurian back-story, which I’d really like to hear more of – perhaps a ‘prequel’ to the chronicles?

The Du Lac Devil is Mary Anne Yarde at her best – and I’m really looking forward to the next one. Five out of five stars.

Mary Anne Yarde grew up in the southwest of England, surrounded and influenced by centuries of history and mythology. Glastonbury—the fabled Isle of Avalon—was a mere fifteen-minute drive from her home, and tales of King Arthur and his knights were part of her childhood. At nineteen, she married her childhood sweetheart and began a bachelor of arts in history at Cardiff University, only to have her studies interrupted by the arrival of her first child. She would later return to higher education, studying equine science at Warwickshire College. Horses and history remain two of her major passions. Mary Anne Yarde keeps busy raising four children and helping run a successful family business. Find our more at her website and follow her on Twitter @maryanneyarde.

Review of The Forgotten Pioneer, by Anthea Ramsay I was a child in Kenya when the country gained independence, so was fascinated to read this very personal account by Anthea Ramsay. Drawing from her grandparents’ diaries and photographs, as well as her own memories as a child, this sometimes harrowing book describes what it was like to live in East Africa for the first white settlers.  We then follow the adventures of Anthea’s family right through to the present day.

Taking real dangers in their stride, from wild animals to lawless Mau Mau rebels, this family lived through an era that could easily be forgotten.  There was the constant threat of malaria or the dreaded black water fever, with only the most basic medical care. It is recalled as a happy time, however, with amazing extremes of wealth and poverty.

at least the men and women who helped to make Kenya what it is today will no longer be forgotten.

Now available on Amazon UK  and Amazon US The second book in Pat Barker’s new trilogy is set in 1917, when young artist Elinor Brooke learns her brother Toby is listed as missing, presumed dead. We follow her attempts to uncover the truth of his death, so I expected this book would reveal the true impact of the war on the lives of everyone.

What I didn’t expect was for Pat Barker to address one of the last ‘taboo’ subjects rarely explored by other authors – with such gripping effect. The same characters so wonderfully developed in Life Class, suffer sometimes physical and emotional trauma, made all the more shocking by our knowledge of their previous lives.

I particularly liked the evocative glimpses of live at the front line, seen through flashbacks. Once again, Pat Barker shows her skill with passages from Elinor’s diary which conceal as much as they reveal, leaving the reader to form their own theories.

Toby’s Room is also a moving tribute to the memory of those who survived the horrors of war and continued fighting, often against the odds, to recover their humanity. The amazing story of Owen Tudor, the Welsh servant who marries the Queen of England - and changes history by founding the Tudor dynasty.

Did I have fun reading it?

Donna Tartt’s third novel, The Goldfinch, won the Pulitzer Prize for Fiction in 2014, so I must admit I read it partly out of curiosity. At nearly eight hundred pages it is quite a marathon, like reading two books back-to-back, so was it worth it, when I have such a long list of books to read? I was expecting a ‘coming of age’ novel but this is so much more.

Bleak and depressing in parts, I’m not giving too much away to say it starts with the untimely death of thirteen year old Theo Decker’s mother. She was one of two, perhaps three likeable characters in the book, replaced by a succession of troubled – and troubling companions, so I shared his grief at her loss.

I read in a Telegraph interview that it took Donna Tartt ten years to write. She says, “So many people say to me, why don’t you write books faster? But working that way doesn’t come naturally to me. I would be miserable cranking out a book every three or four years. And if I’m not having fun writing it, people aren’t going to have fun reading it.”

Did I have fun reading it? On the back cover The Goldfinch is described as a ‘a gripping page turner’. Several times I found myself turning back and reading a page again to see if I had missed something. Rich in metaphor, coincidence and serendipity save the plot on more than on occasion. Readers have to work hard to understand character motivation and often shocking action is interspersed with long, indulgent passages. The Goldfinch reminds me there really are no rules in novel writing. For that reason, I have to say yes. Historical fiction novel about the adventures of Richard Neville, Earl of Warwick, the wealthiest noble in England, know of as 'The Kingmaker'. He becomes a warrior knight, bravely protecting the north against invasion by the Scots. A key figure in what have become known as ‘the Wars of the Roses,’ he fought in most of the important battles. As Captain of Calais, he turns privateer, daring to take on the might of the Spanish fleet and becoming Admiral of England.

The friend of kings, he is the sworn enemy of Queen Margaret of Anjou. Then, in an amazing change of heart, why does he risk everything to fight for her cause? Writers from William Shakespeare to best-selling modern authors have tried to show what sort of man Richard Neville must have been, with quite different results. Sometimes Warwick is portrayed as the skilled political manipulator behind the throne, shaping events for his own advantage. Others describe him as the ‘last of the barons’, ruling his fiefdom like an uncrowned king. Whatever the truth, his story is one of adventure, power and influence at the heart of one of the most dangerous times in the history of England.

Available in paperback and eBook on Amazon UK and Amazon US Book 1 in the Tudor Legacy Trilogy, by Laura S. Andersen